In mid-2013 the new Ordinariate Use Order of Mass (officially known as “Divine Worship – Order of Mass”) was approved by the Vatican. After being used on a preliminary basis in various Ordinariate groups, missions and parishes in all three Ordinariates worldwide, it was officially presented to the public in a Solemn High Mass celebrated at Our Lady of the Assumption and St. Gregory, Warwick Street, London, on 10th October 2013. The complete “Divine Worship – The Missal” is published by the Catholic Truth Society and was introduced in the Ordinariates in Advent 2015. 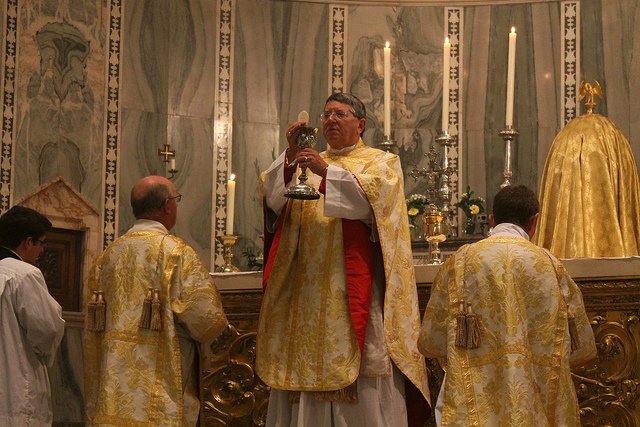 Pew leaflets from individual celebrations will not be made public online since the new Missal is subject to copyright, but a booklet containing the Order of Mass is being made available for use in Ordinariate  churches. Here is the Ordo Missae as included in the new Missal.

Here is a brief trailer on the new Mass from the Ordinariate mission in Oxford, England:

On July 7th 2015 the following extracts of the new Ordinariate Use Mass, which have been taken directly from the Book of Common Prayer, were recorded at Our Lady of the Assumption and St Gregory in Soho, London, the central church of the Personal Ordinariate of Our Lady of Walsingham.

The Ordinariate Use is an officially recognised liturgy of the Roman Rite, which integrates significant elements of the Anglican patrimony into the Catholic Church.

However, the Ordinary Form of the Roman Rite will most probably remain the Ordo used most frequently in the UK Ordinariate, although each Ordinariate group will celebrate the new Mass from time to time.

At this link you will find a slightly shortened video of a Book of Divine Worship Rite 1 Pontifical High Mass, celebrated by Mgr. Keith Newton at the 15th Cologne Liturgical Conference in Herzogenrath, Germany, on 1st December 2012. This is the form of Anglican Use Mass which was permitted in the Ordinariates until the introduction of the new Order of Mass.

Interim Guidelines for the Celebration of the Holy Eucharist in the Personal Ordinariate of Our Lady of Walsingham were promulgated by the Ordinary at Easter 2013. These referred in particular to the Book of Divine Worship Ordo.

Here we have embedded a video of the Solemn Mass celebrated according to the Book of Divine Worship (BDW) on 9th November 2012. The celebrant was Bishop Robert W. Finn of Kansas City – St. Joseph and the preacher was the Ordinary of the US Ordinariate, Msgr. Jeffrey Steenson:

The new Ordinariate Use Ordo was introduced in the USA and Canada in Advent 2013.

Here is a video of a Solemn High Mass according to the new Ordinariate Use Order of Mass (in the variant inspired by the Anglican and American Missals), celebrated by Msgr. Peter Wilkinson at Holy Rosary Dominican Priory in Portland, Oregon on August 6, 2014 (the anniversary of the death of Blessed Pope Paul VI – the pope who filled the movement for unity with Anglicans with new dynamism following the Second Vatican Council).

Also from the United States, here is Mount Calvary Church, Baltimore. On 22nd January 2012 they hosted members of the St. Thomas More Society of Scranton, Pennsylvania, on the eve of the 2012 March for Life. Fr. Eric Bergman, of the STMS in Scranton, officiates, and Fr. Dwight Longenecker, of Our Lady of the Rosary parish, Greenville, South Carolina, preaches the homily.

Here are some choral pieces from the Evensong of the Oxford Ordinariate Group on 15th June 2011:

On 22nd June 2012 the Vatican recognised the rite of matrimony to be used by the Personal Ordinariates all over the world, marking a revision and extension of existing texts, including the Book of Divine Worship:

Here is the official text.

On the same day the new funeral rite was promulgated by the Vatican.

Thoughts of an Ordinariate Catholic

Whispers in the Loggia

Foolishness to the world

The Anglican Use of the Roman Rite